Linda Killian is the founder and executive director of Independent Americans United.

She is a Washington author, journalist, analyst and activist and a regular featured contributor to the Wall Street Journal's "Washington Wire". She is a nationally-recognized expert on independent voters and also writes for The Daily Beast, The Atlantic and Politico. She has been a senior scholar at the Woodrow Wilson International Center for Scholars and appears frequently as a political analyst on national television.

Her book "THE SWING VOTE: The Untapped Power of Independents", examines the polarization and dysfunction of our political system from the perspective of Independent voters. It focuses on four swing states – Colorado, Ohio, New Hampshire and Virginia – and presents four  demographic groups that illustrate who the swing voters are - NPR Republicans, America First Democrats, The Facebook Generation and Starbucks Moms and Dads. Killian describes the intense disappointment and frustration these voters have with the political system and the two parties and examines the heightened polarization of Democratic and Republican elected officials and their inability to deal with our nation’s most important problems. In “THE SWING VOTE” she offers solutions for fixing our broken political system and ways for Independent voters to make their voices heard.

She has also written for national news organizations including The Washington Post, Politics Daily and U.S. News & World Report.com and many other magazines and websites. Her television appearances on MSNBC, CNN, Fox News and C-SPAN include Now with Alex Wagner, The Cycle, The Melissa Harris-Perry Show and Hardball with Chris Matthews. She has also appeared multiple times on The NewsHour on PBS. Her national radio appearances include WNYC’s The Takeaway, Sirius Radio, WHYY in Philadelphia and National Public Radio public affairs shows in Miami, Detroit, St. Louis, Cleveland, Columbus, New Hampshire, Maine, Connecticut, San Francisco, Seattle, Portland, Chicago and Boston.

She is a frequent lecturer on national politics and public affairs and her work has also appeared in "The Washington Post", "The Los Angeles Times", "The New Republic", "The Weekly Standard", "The American Spectator", "The Christian Science Monitor", "The Boston Globe", "Redbook", "Washingtonian" and "People" magazines.

She is also the author of "The Freshmen: What Happened to the Republican Revolution?" praised by The New York Review of Books and other reviewers as a colorful, well-written and insightful analysis of what happened to the congressional Republicans of 1994. "The Freshmen" reveals the maneuvering and intrigues, the successes and failures of the historic 104th Republican Congress. The book is considered the definitive work on the Class of '94 and Killian has been quoted in Time magazine, The Washington Post and Politico on this subject.

She was the senior editor of National Public Radio's "All Things Considered" where she was responsible for the editorial content of NPR's national evening news program and a reporter at "Forbes" magazine in New York.

She has a master's degree in public administration from Harvard University’s Kennedy School of Government. 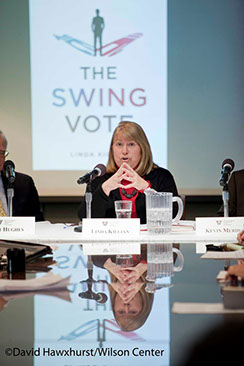